In this special blog series, Digital Transformation & the Evolving Role of ERP, we’ll discuss ERP’s new place at the heart of Manufacturing’s digital transformation. From business analytics to artificial intelligence and the Internet of things (IoT), you’ll learn about the cutting-edge technologies disrupting how manufacturers do business. 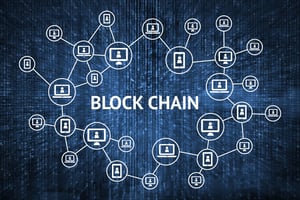 Not familiar with blockchain? Chances are you’ve heard of its most famous application. Bitcoin, a blockchain-based currency system, is the first digital currency system to work without a central bank or common administrator. Deemed “the people’s currency,” bitcoin relies upon the unprecedented security of blockchain technology to remain fully democratic in function.

How does blockchain work, and how might it be put to use in the world of manufacturing? Read on to learn more about this powerful technology and its potential implications for next-generation ERP.

Simply put, blockchain is a peer-to-peer database technology that allows users to create a ledger of records called blocks. Each block is time-stamped and typically contains a cryptographic hash of the previous block, to which it is linked. Each unique block is linked to an individual participant. Altogether, this system creates a sort of unending “receipt” that permanently records all transactions. Because of this infrastructure, blockchain is innately resistant to data modification. When updates or changes are needed, a consensus between participants in the system is required, as no block can be retroactively altered without altering all subsequent blocks in the chain. Likewise, data that has been entered can never be erased.

Blockchain in the Business World

The biggest benefit of blockchain is its inherently heightened level of security. Experts are now looking at how, in addition to currency, blockchain may be leveraged in the business world. For example, although we are in the age of “big data,” enterprise data is largely still siloed. This affects not only a company’s ability to securely share data amongst its employees but also with its partners. Sharing data is still perceived as a leap of faith, in which companies risk losing their competitive advantage. Once business intel is out of your hands, where might it end up and how might it be used?

Blockchain aims to solve this problem by creating a system of trust among its participants. Each and every transaction is permanently tracked. And because the system is not regulated by a single control center, there is no sole point of failure. This decentralization virtually eliminates the need for IT monitoring of a blockchain database. Because of it is open source, experts believe the blockchain platform will excite developers and its use will grow quickly. Suitable blockchain applications that have already been identified include transaction processing, medical records, voting, and supply chain management.

New use cases for blockchain will continue to emerge as the technology takes hold. However, one area of opportunity is integration with ERP. Many see this as a way to heighten system traceability, step up recall prevention, and enhance audit-readiness, all of which are particularly valuable to medical device manufacturers and those working in FDA-regulated industries . Blockchain-ERP integration may also enhance asset management capabilities, allowing information related to manufacture, shipment, storage, failure, and maintenance to be efficiently and securely stored. Blockchain would not replace ERP systems. Rather, it would provide a software-neutral integration tool. By integrating their ERP systems with blockchain, several companies operating disparate ERP systems could, in effect, access the same blockchain database. The result? A single indisputable record that all parties hold in agreement.

What role will blockchain play in the ERP systems of the future? Only time will tell – but we may find out sooner than you’d think.